Mondulkiri Elephant & Wildlife Sanctuary in Cambodia is not a real Sanctuary 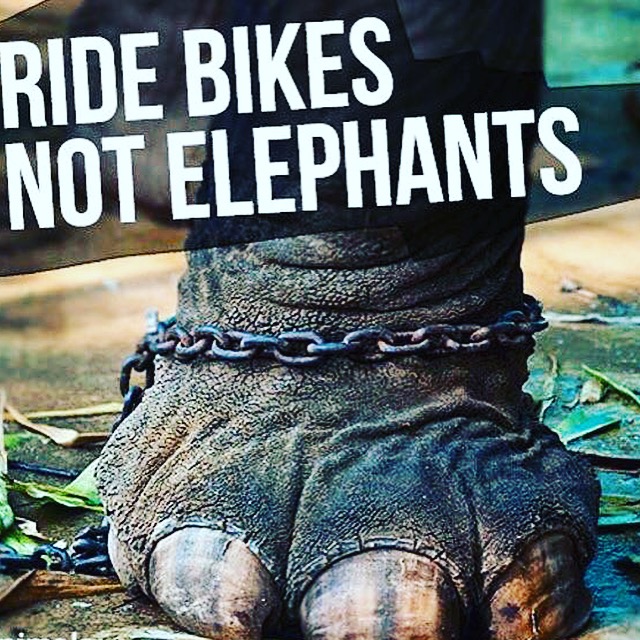 I was looking forward to visit the elephant sanctuary in Mondulkiri for about 2 months. After I painfully saw how elephants were mistreated in Asia for tourists to have a ride on their back.

Then, I read a report about the sanctuary in Mondulkiri written by someone who volunteered there. And I thought, what a great place to experience and visit elephants in the wild. I am going to go there.

One evening before my day in the wild would start, I heard rumors on the street saying, these elephants in this “sanctuary” aren’t as free as people from the tour office advertise. They also said, they are still used as work elephants and they are just rented out for the time to show them to the tourist groups.

I thought, how could that be? Where do all these positive reviews written by volunteers come from? They spend time there, they should know better! Or shouldn’t they?

The tour started very well. We got dropped off on the side of the road and we started walking across grass fields and over hills with our tour guide Tom. He explained some very interesting facts about the local flora and fauna. We kept hiking and exploring plants until midday. Slowly, we got suspicious. Is he flaying time? We haven’t seen a single animal, not an elephant nor other animals, so far.

Suddenly, we met a volunteer on one of the hill tops. Tom, our tour guide asked him, “Have you seen the elephants yet?” The volunteer answered, “No. No sign of the elephants yet. But I keep an eye open. I am very sure we will find them soon!”

Later, I asked myself, why the volunteer had to lie to us too. What do they do with these volunteers in these 5 days? Brainwash? Or was it just the feeling of superiority over us, in this moment, when he knows something we don’t? What made him lying to us?

At a junction, where the track went right and left, I thought out loud, “Let’s go left everybody!”. But Tom said very commandingly “We are turning right at this junction!”.
As if he knew exactly where we needed to go to “find” the elephants.

I thought at this moment, it would be a good idea to go ahead of everybody else, because if we find elephants in this forest, I would love to be the first to encounter them.
Right before we finally “found” one elephant, Tom overtook me and shouted out loud, “I found the elephant!”. It was before he was actually able to see the large animal. Except Tom is one of the fortunate people who is able to look around corners.

He only saw the guy who was leading the elephant with a large wooden pole in his hand sitting on a rock beside the track very angry looking.
We were actually able to see the elephant when we continued about 20 meters further around the previously mentioned corner. We didn’t find the elephant there in the woods by accident. The animal was lead there by his leader who shouted out loud commands and threatened it with his wooden pole.

We were allowed to feed bananas to the elephant. That was our only close up interaction with this elephant for the whole day after all. 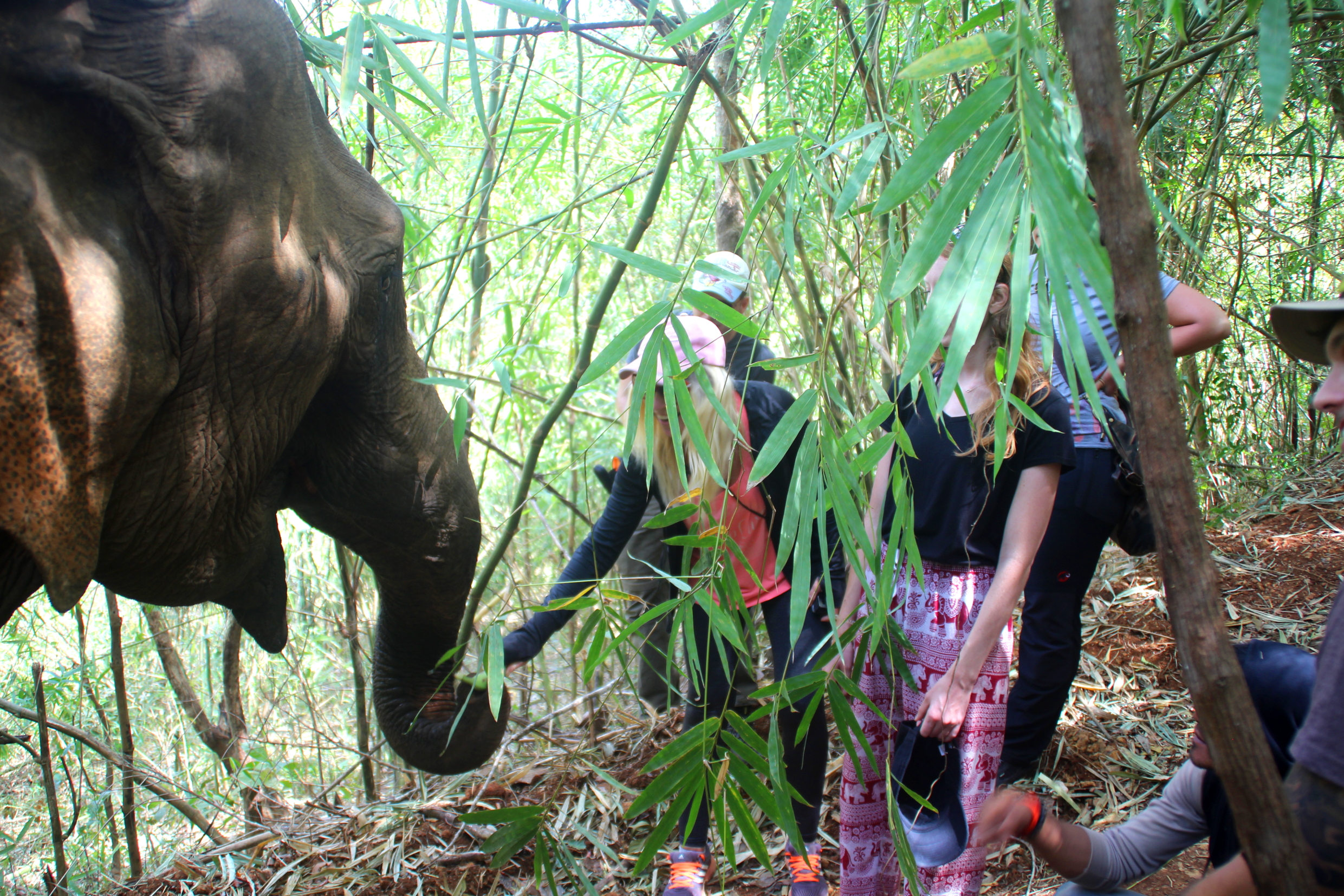 The reason behind it was that this enormous animal wasn’t allowed to get too close to us. Because it is dangerous, they told us. To keep space between us and the giant, the elephant leader shouted out very loud and rude sounding commands and threatened the animal with the pole he carried in his hands and if this wasn’t enough he grabbed the elephant very hard by the ear and pulled it backwards.

Somebody of our group asked about the other elephants in the sanctuary. Because the office in town advertises the sanctuary with about 5 elephants. Tom answered, that they were on a wedding. After we asked back if there is any chance we could also go to the place where they have this wedding. Tom said, that it’s too far away to go there. His actual words were: “The wedding is far far away.”

I doubted his words very much. Because I went through many reviews from the past written by people who participated in a tour like ours and they always reported about 1 or 2 elephants they have seen on the whole tour. And there is always somebody with the elephant, leading it. They carry a wooden pole to threaten the elephant, to hit it with it. You can see the fear in the elephant’s eye when the elephant leader raises his voice and holds the pole high above his head.

It turned out the guide had an answer for everything, of course.

Did I mention that you have to pay a donation to participate in a 1 or 2 day or 1 week adventure.
The one day trip starts at 40 US-Dollars per person. It is a very lucrative business without much expenditures (our group was 6 people 240 US-Dollars… and we dropped off another group of about the same size for the 2 day adventure which is of course way more expensive).

There is not much expenditures for the operator because the volunteers are preparing everything for the 1 and 2 day groups. Means, tourists cook for tourists while paying top Dollar for working there which includes cooking, washing dishes and building houses.

When we reached the camp it was lunch time. I wouldn’t eat. Actually, I couldn’t, because I was too horrified from the events which have just occurred and it was still going on and should follow. And the whole constellation there. We are all tourists and we are all paying and we are serving each other. This sounds weird while I am writing about it. That’s because it is.
I couldn’t think of a better business plan myself. Unfortunately, the only one who is really working hard for the money is the elephant at the end!

Even the volunteers admitted that they spent only one day with the elephant. The other days they were hiking or working.

So, how come these volunteers just stop thinking themselves. They start to believe every word somebody tells them. And afterwards they go back home and feel great about themselves because they did a “good thing” for the elephant(s). Maybe this short chapter in the “sanctuary” even ends up on somebodies resume as a reference that they provided some kind of a great service for mother nature. How unselfish of them?!

There is no understanding from my side what so ever.

For the first time I see how cults must work. It is a similar constellation. You pay for something higher to believe in, which doesn’t exist of course. And you try to lure the newcomers to commit to the same believes based on lies.

The day wasn’t over yet.

We went down to the waterfall after lunch. We were supposed to swim there. By now, I had lost the fun for any activities for that day, unfortunately. So, I didn’t go in the water. Maybe other visitors and tourists come out of different reasons to this place. I was here because I wanted to see elephants, well, not only see elephants, actually experiencing elephants in the wild, in there natural environment. At least as free living as possible under the circumstances of the present environment where elephants wouldn’t have much space to live in anyways. We didn’t find any free elephants, unfortunately.

Why are we treating these wonderful animals like this? Animals should be treated with respect.

When the elephant was in its weakest position, almost falling over, the elephant leader jumped on its back and lead him into deeper water. He forced him to go down and take a bath, always threatening with the wooden pole in his hand. 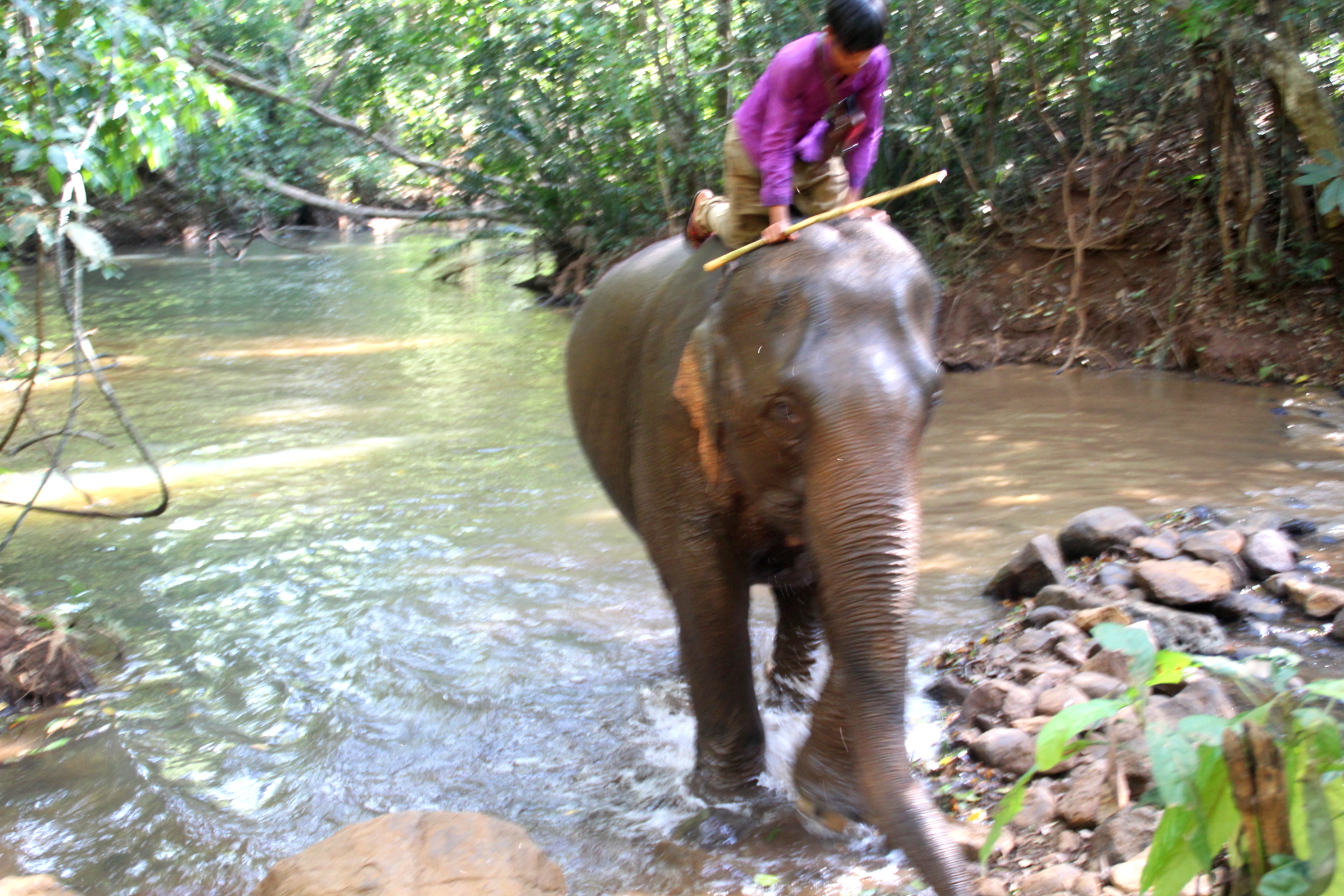 It turned out to be the worst day in my life. I have never seen a more unhappy elephant, not even in a zoo or a circus. They tell us, that elephants love taking a bath. But this elephant didn’t like a bath in this moment. And that’s the whole point of being free, isn’t it? To take a bath when the elephant wants to take a bath. Not when we force the elephant to it.

But at this point, I don’t want to miss out to tell you about the monkey which lives in the camp.

There was a dog carrier where they locked him up while no visitors were around. I saw one of the residents of the village kicking the monkey in the face. Another resident shot him with a airgun while we were right there. 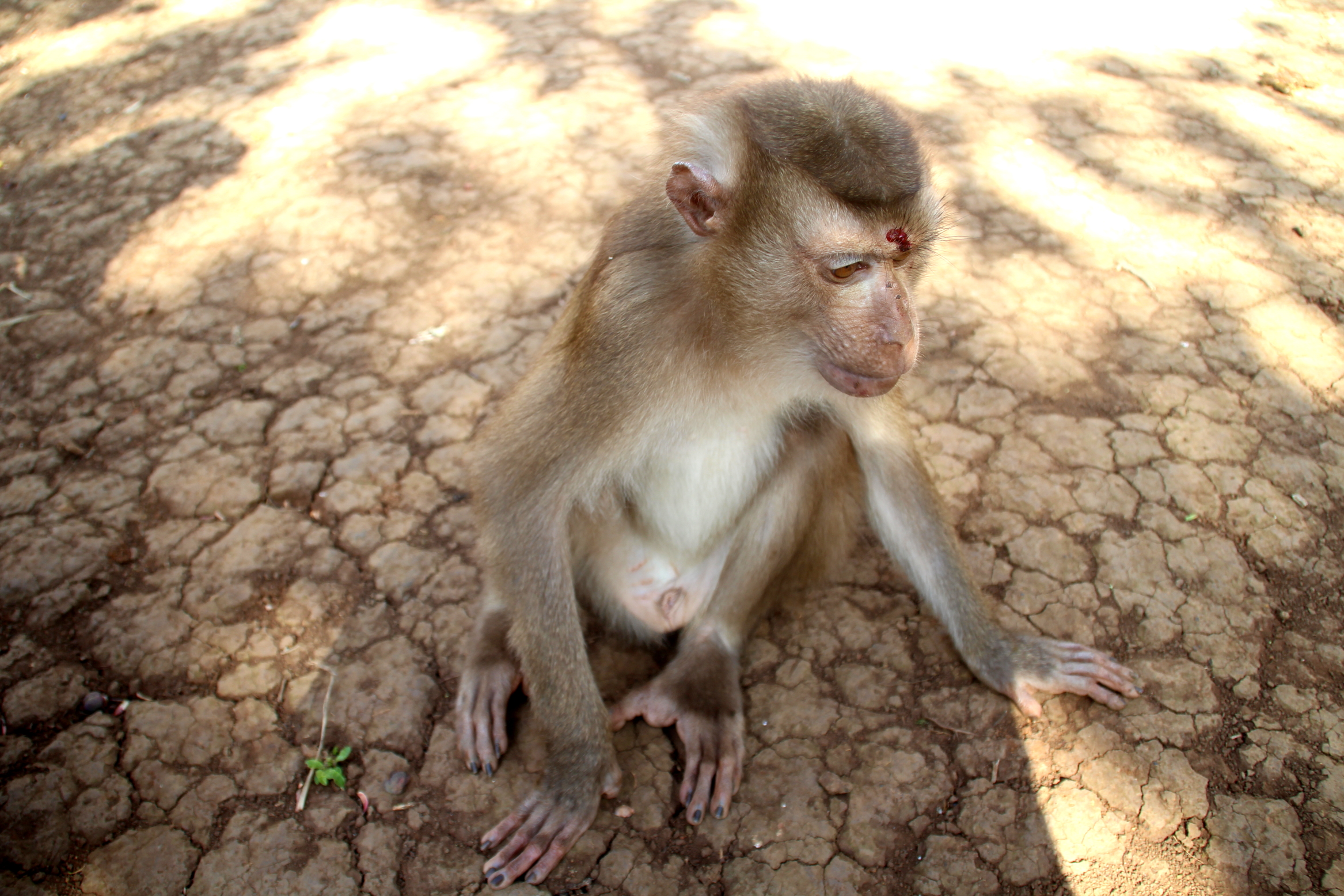 On this day I saw too many things I rather never wanted to see.
And here you can see the two pics with the self- made airgun! Its a bad shot, I know, but you don’t always have your camera ready! I was not expecting a guy, coming out of his house, going straight to the monkey and shoot him in the face!
Me and the others were totally shocked! One of us was screaming! The moment when Tom looked around and saw the air gun too! He said nothing! The guy turned around and went back! In this moment I woke up from my shock moment and made these two photos! 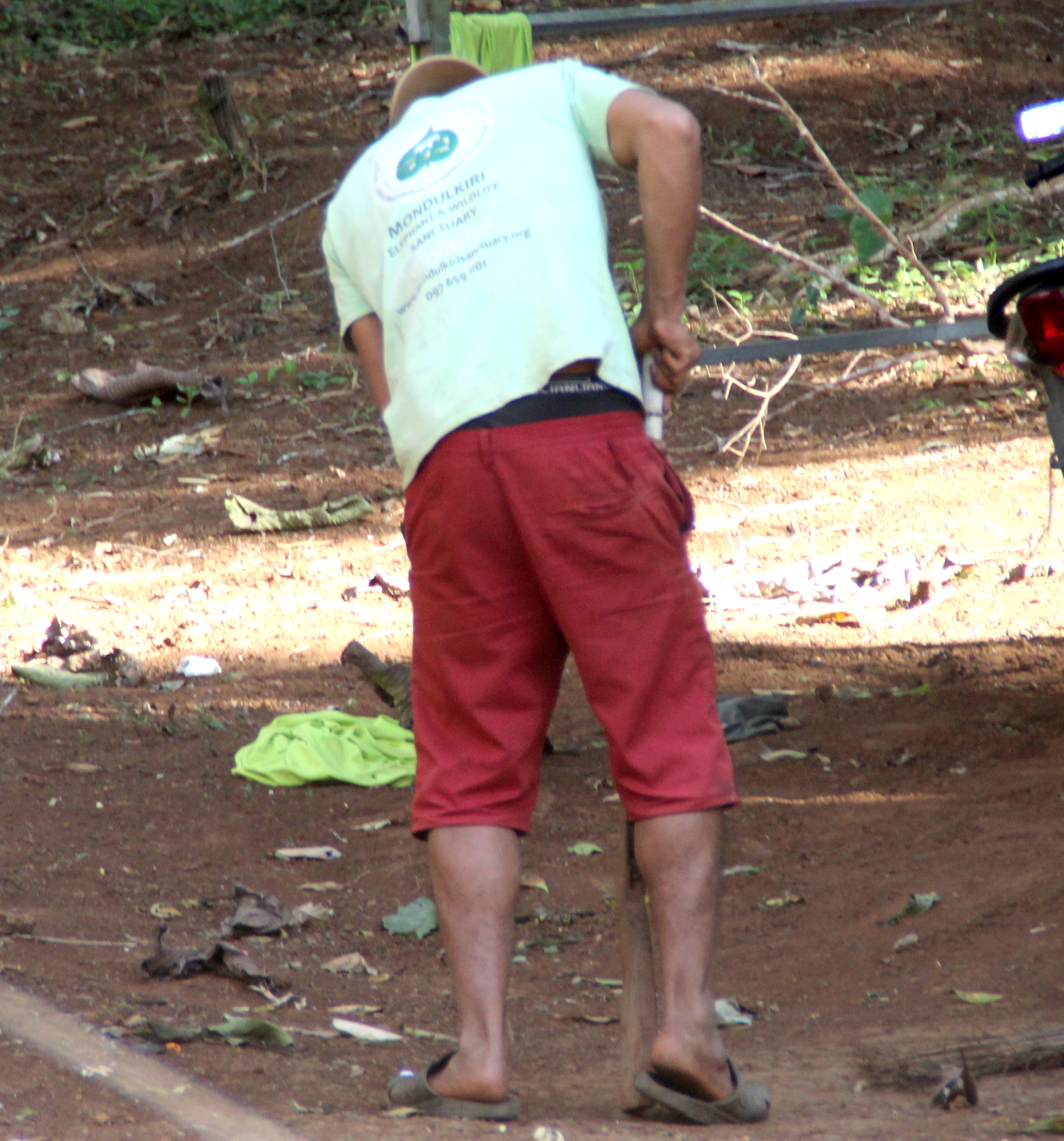 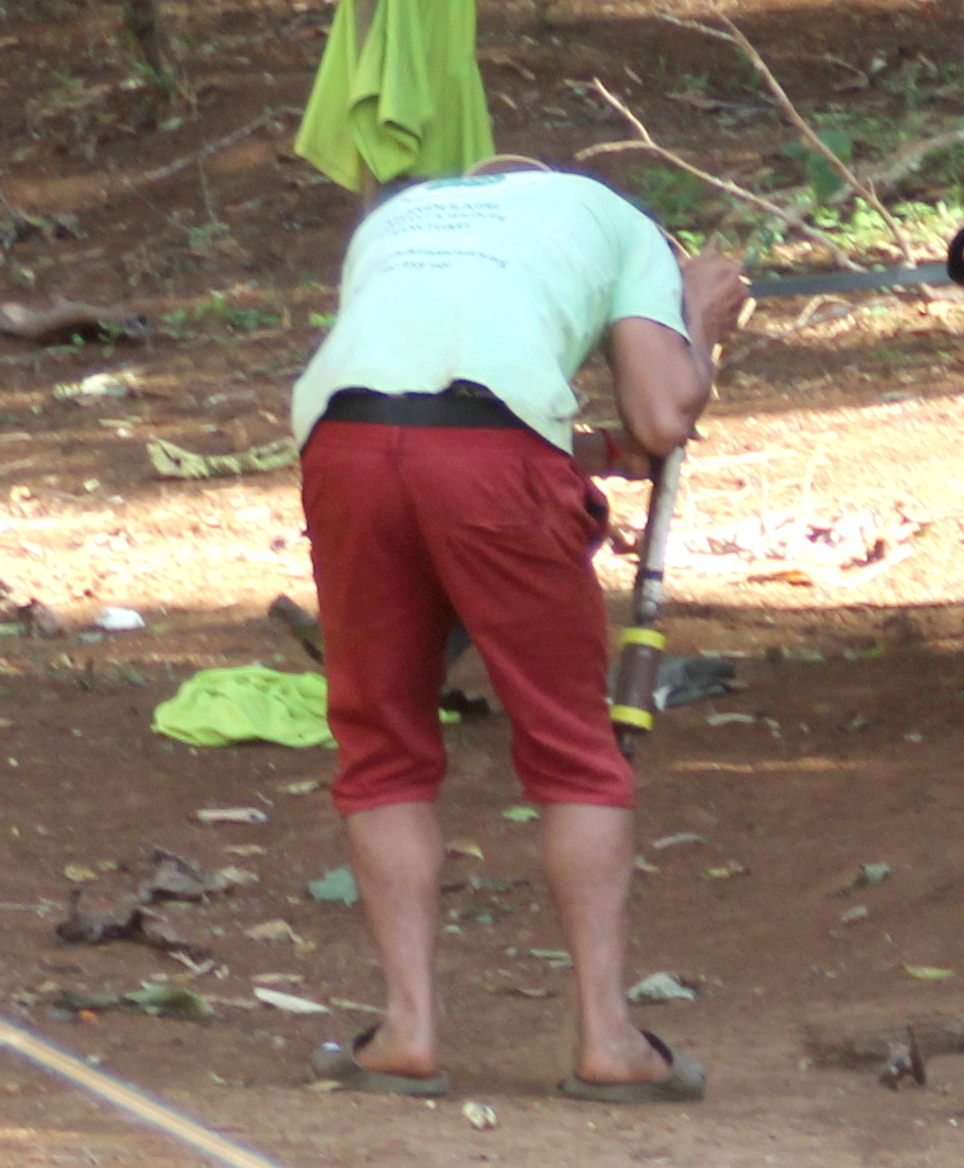 This is what I got, after I published my review on Tripadvisor! Of course I deleted the name! And he was right. After two weeks Tripadvisor deleted my review, without given me notice. This is what they do. 1* reviews are bad for business. This is the reason why the Mondulkiri Elephant and Wildlife Sanctuary has just one bad review. But I will keep going to publish my review. Over and over again. I will not give up, because I am telling the truth and in this world it is not easy to tell the truth. 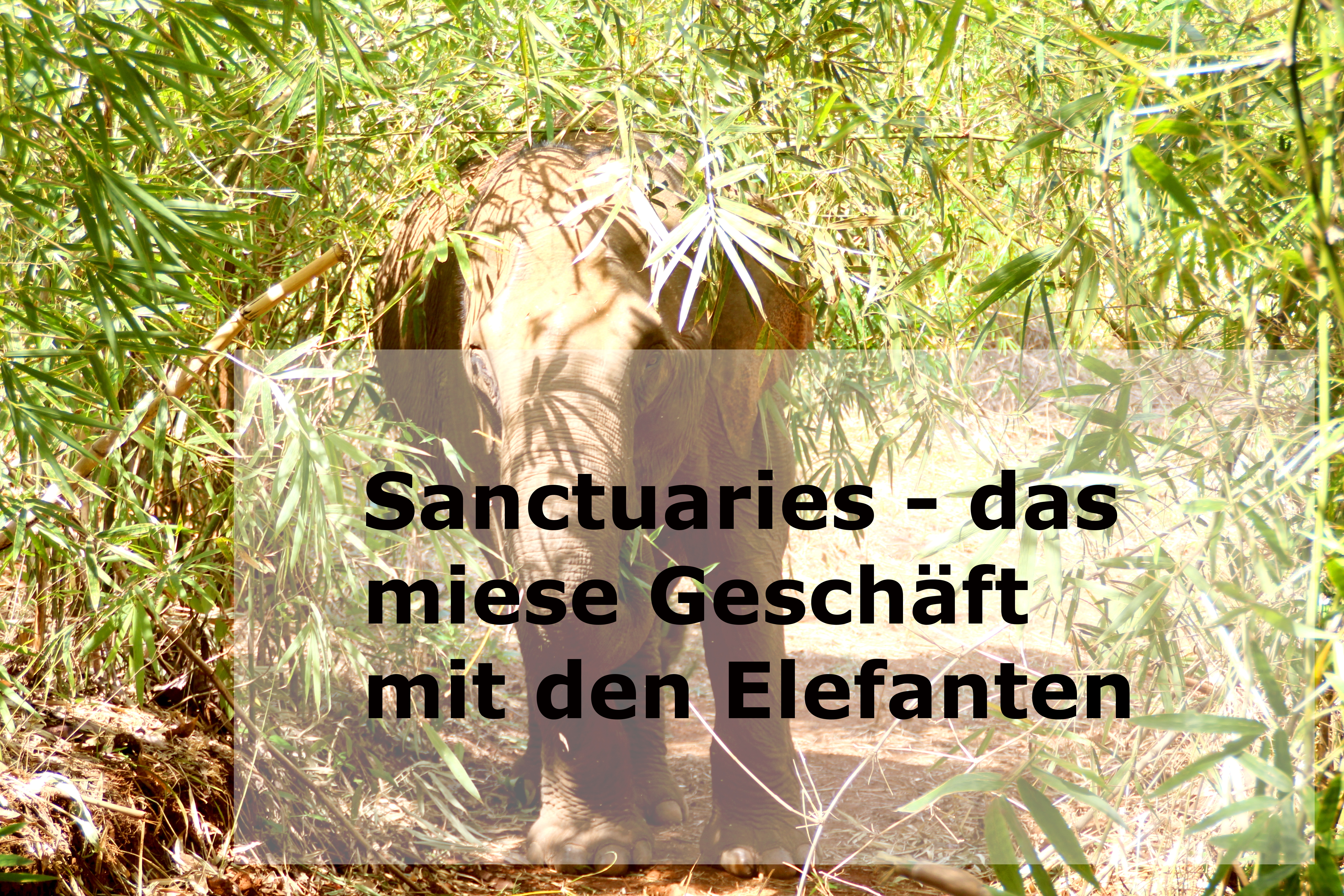